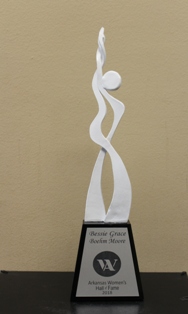 For her important contributions to education and civic involvement, Bessie B. Moore, the first executive director of Economics Arkansas was posthumously inducted into the Arkansas Women's Hall of Fame, Aug. 30, 2018, in Little Rock.

Bessie became one of the nation’s most fervent and most loved advocates of economic education when she took the helm of what was launched as the Arkansas State Council on Economic Education in 1962. She understood that a citizenry well versed in economics, personal finance and entrepreneurship was key for protecting individual liberties and resisting populist rhetoric.