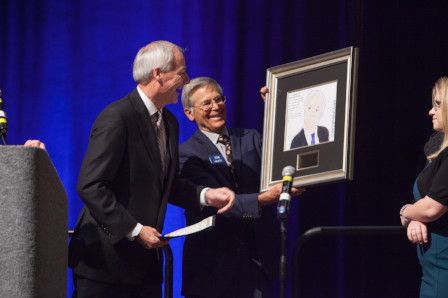 Governor Asa Hutchinson, who founded his first business in elementary school, was honored for his long-standing commitment to free enterprise during a gala luncheon hosted by Economics Arkansas on Oct. 27, 2016, at the John Q. Hammonds Center in Rogers.

Those early experiences of running a paper route and a shoe-shine stand taught the young student that anybody can thrive in a free market economy, Master of Ceremony Bob Boehmler said in his introduction of the governor. As a public servant, Hutchinson has succeeded as Arkansas’s “top sales person” to recruit national and international businesses to the state and help export its goods and services around the globe, Boehmler added.

We invite you to view photos and videos from the event.

A group of fourth-graders from Grace Hill Elementary School, Rogers School District, and their teacher Amy Mileham described how economics lessons in the classroom taught them important insights of how the world works. Their 2015-16 project, “Baseball Economics,” illustrated key economics concepts such as decision-making, human capital, goods and services, supply and demand, scarcity, global trade and more. They learned how to earn money and what to do with it: spend some, invest some, save some and give some. “Economics is the glue that holds everything together,” Mileham concluded, adding that her students would use these lessons for the rest of their lives.

More than 525 guests attended the event, including teachers and students from nine school districts in northwest Arkansas.